Thanks to its position, well connected with the major communication routes, approximately halfway between Turin and Milan, and only 32km from Malpena Airport, it is ideal for commercial and industrial development.

The Roman map of its road network clearly indicates its origin and makes visiting the center very simple and finding your way around is not a difficult game.

The historic center is full of things to see, and I recommend some that you absolutely must not miss.

Imposing a few steps from the center is the Coccia Theater. This largely neoclassical style building served as a springboard for many of the greatest theatrical actors, a place where great masters practiced and from which stage aspirants could hope to reach the 'La Scala' from nearby Milan. 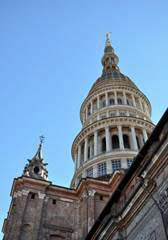 Taking a stroll downtown, in a small blind alley, you will find what I would call a temple of Novara taste, the taste linked to the table and simple cuisine, the one-handed down by the Camporelli biscuit factory, famous for Novara biscuits.

Originating from a recipe that comes from the Middle Ages, still, today, prepared with simple ingredients like the original recipe. You cannot fail to see the Basilica of San Gaudenzio, an imposing building of Catholic worship that has become a symbol of the city of Novara thanks to the majestic Antonelli Dome, which rises to a height of 121 meters.

The most imposing building of the three is certainly the Cathedral or Duomo di Novara. The Cathedral of Santa Maria Assunta boasts, in fact, considerable dimensions. The Novara Castle was built by the Visconti, revised by the Sforza, and then transformed by the Spaniards. Over the centuries, it has changed appearance and function several times: it was a prison, and today it hosts exhibitions and cultural events.

The Broletto is the corner of Novara still in the Middle Ages. A courtyard overlooking medieval buildings with arcades and fifteenth-century frescoes tells stories of chivalric poems in a completely particular atmosphere.

Among the most interesting destinations around Novara there is: Lake Orta with the splendid village of Orta San Giulio built on the island of San Giulio in the middle of the lake, Lake Maggiore with a small village overlooking the lake Arona and Stresa, characterized by charming hotels with a retro flavor, noble villas, well-kept gardens, and small pebble beaches where you can relax. With the panorama of the Alps and the view of the Borromean Islands, the landscape is enchanting.

Novara cuisine is a pleasant surprise. the trademark of the true paniscia, a treasure of the Novara countryside based on rice, beans, cabbage, cabbage, pork rinds, salam d’la duja, and red wine such as Ghemme, Fara, or Boca. All doc wines.

The tapulon is a very fine stew made with donkey meat cooked for a long time in wine and accompanied with polenta. In this area, we eat a lot of donkey meat, frogs, and snails. Gorgonzola is the undisputed king of Novara cheeses, fresh or aged.

The biscuits are strictly the traditional ones, crunchy and light, produced by the Novara biscuit factory and sold in small gift packs (Biscottificio Camporelli, which has been producing Novara biscuits since 1852).

So after having presented this territory to you, you have to travel and check for yourself

You can also read more about top travel places of your choice on TBO Academy to plan your next travel.