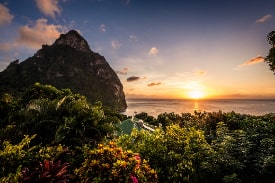 Saint Lucia is a West Indian Island republic in the eastern Caribbean Sea, close to the Atlantic Ocean. The island was recently called Iyonola, the name given to the island by the local Arawaks, and later Hewanorra, the name given by the local Caribs, two separate Amerindian people groups. It is located north/upper east of the island of Saint Vincent, northwest of Barbados, and south of Martinique, and is part of the Windward Islands in the Lesser Antilles. It covers a land space of 617 km2 (238 square miles) and announced a populace of 165,595 in the 2010 registration. Its capital is Castries. The French colonized Soufrire, which served as the island's first capital.