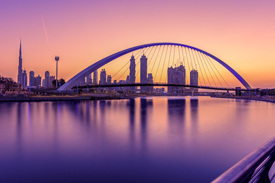 The Metropolitan of the Future
Dubai is a city of high-rise building, harbours, and beaches, where big business takes place alongside sun-seeking tourism. Its large émigré population feels like a Middle Eastern melting pot, and the ambience is generally liberal. Religious affiliations are not a leading aspect of city life. Islam is the majority religion, but churches and Hindu temples coexist with Dubai's mosques. Dubai is a relatively crime-free place where organizational efficiency and openness to business have persuaded astonishing growth. However, criticism of Dubai's dictatorial government and ruling elite is not accepted, and there persists an atmosphere of inconspicuous corruption.

English
Pass the quiz to complete the course.
53