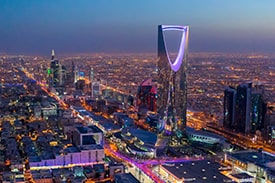 A warm welcome to one of the wealthiest cities in the world. Few of the world’s cities have transformed as rapidly as Riyadh, from a walled, mud-brick way station along the desert trading routes into a metropolis of several million inhabitants in the 20th century. The Riyadh of today is a modern testament of Saudi Arabia’s cultural and economic influence and a major administrative and financial centre of the nation. A capital of very strong contrasts where one can gape at a majestic 99 storey skyscraper, take in spectacular views of the city from inside an enormous glass ball suspended just below the top of a tower or visit Saudi Arabia’s best museums located in the city, shop at its modern shopping malls and timeless souqs or visit its historical landmarks, however beyond glittering Riyadh, the Arabian desert holds centuries of legends, Bedouin tales of flowing rivers and ancient cities buried underneath the sands.