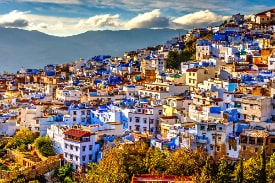 Morocco, formally the Kingdom of Morocco, is the Maghreb area of North Africa's northernmost country. It has land borders with Algeria to the east and the disputed area of Western Sahara to the south, and overlooks the Mediterranean Sea to the north and the Atlantic Ocean to the west. Morocco also claims the Spanish exclaves of Ceuta, Melilla, and Peon de Velez de la Gomera, as well as a number of minor Spanish-controlled islands off the coast. Morocco has a population of over 37 million people and covers an area of 446,550 km2 (172,410 sq mi) or 710,850 km2 (274,460 sq mi).