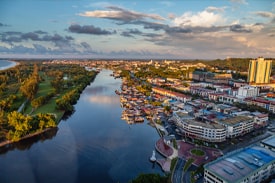 It is a hidden gem of Malaysia, waiting to be discovered. Miri is a coastal city in north-eastern Sarawak and the second largest city after Kuching. It is close to the Brunei border on the island of Borneo. Miri was a fishing settlement before oil was discovered in 1910 A.D. by Royal Dutch Shell and oil boom bought rapid development to Miri and by 1929 A.D., it had grown to become the administrative centre of northern Sarawak.