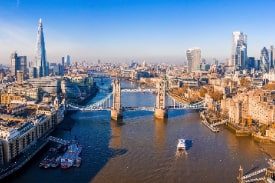 With approximately 37 million visitors in 2018, tourism in the UK is the world's tenth most popular destination. In 2017, tourism in the United Kingdom contributed £213 billion to the GDP, with that figure predicted to rise to £265 billion by 2028. The United Kingdom is an island country on Europe's northern coast. The United Kingdom encompasses the whole island of Great Britain, including England, Wales, Scotland, and the northern half of Ireland. The term "Britain" is occasionally used to refer to the entire United Kingdom. London, the country's capital, is one of the world's most important commercial, financial, and cultural centres. Birmingham, Liverpool, and Manchester in England, Belfast and Londonderry in Northern Ireland, Edinburgh and Glasgow in Scotland, and Swansea and Cardiff in Wales are significant cities.