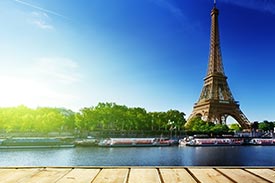 The city of Paris derives its name from its early inhabitants, the ‘Celtic Parisii Tribe who founded the city in 250 B.C.‘. Paris became the capital of France in the 3rd Century A.D. and today it is also the most populous city of France located in the north-central part of the country, in the region of ‘Ile-de-France’.

English
Pass the quiz to complete the course.
50
Start this course

The best course and an excellent knowledge about PARIS. Must read before you travel to Paris. - ANIL THOMAS (VEGA MODERN TRAVELER SERVICES COMPANY LIMITED)