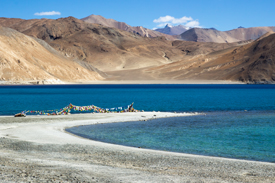 The Land of High Passes
Ladakh is a wide area of northern and eastern Kashmir in the Indian subcontinent's northwestern corner. Ladakh has divided administratively between Pakistan (northwest), which is part of Gilgit-Baltistan, and India (southeast), which is part of the Ladakh union territory (until October 31, 2019), which is part of Jammu and Kashmir state; China also administers parts of northeastern Ladakh.

English
Pass the quiz to complete the course.
12