I want to share my recent travel experience to Bhangarh – The Most Haunted Place in Asia. Bhangarh is a place that has its own Scary Tales and Stories. The Bhangarh Fort is located on the Sariska Tiger Reserve border in the Aravali Range of Hills in Alwar District, Rajasthan. The Royal State of India is famous for its sublime beauty and grandeur of its Forts and Palaces. As I am an Alwarian (Rajasthani), I have roamed a lot of Forts & Palaces as Dadhikar Fort, Amer Fort, Nahargarh Fort, Neemrana Fort, Kesroli Fort & many more, But this time I was not ready to go to Bhangarh Fort. Because I have heard a lot of horror stories about it. Which sometimes seemed to be rumors, but I never tried to know the reality.

My friends and I planned an outing on the first weekend of 2K21. We planned to go to Sariska Tiger Safari for a Day out. Everything was planned, and we booked a visit to Sariska Palace too. But on the day of the visit, the morning newspaper printed an unfortunate news that due to the Covid-19 Pandemic, the safari has been closed. Then we have to change our whole plan, and finally, we decided to go to Bhangarh, Rajasthan. Honestly, I was not so much in for this plan. We decided to leave from my place. The distance from my home is 102Km & I lived in the Center of The Alwar. So, we left around 10:15 AM. As it was Saturday, so everything was closed in the central city as per Rajasthan Govt. Guidelines during COVID.

On the way, there were stunning Aravalli hills, which were covered with full fog. To reach Bhangarh, we had to travel the path of the hills. We reached Bhangarh in around 2 hours. At the entrance, we parked our car, which was chargeable. The weekend was there, so there were 150+ cars parked, and many people came to visit. After that, we entered the Bhangarh village from a colossal Gate. We took the ticket from the ticket counter. After that, there was a map on the entry, which contained information about the whole village. We followed that map.

Bhangarh Fort History – The Most Haunted Place in Asia

The Ancient Township was founded in the latter half of the 16th century by Raja Bhagwant Sa, the Ruler of Amber back then, and Later on, it was made the capital of Madho Singh, Brother of Raja Man Singh. Madho sing was succeeded by his son Chatrsingh. (Do remember this name Chatrsingh). 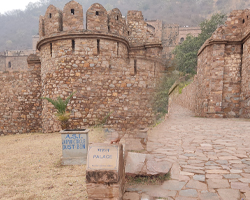 At a point in time, Bhangarh Fort Rajasthan was not just a fort but also a charming village. The market was called Johari Baazar. All the shops in the town were two-storied. The Interesting Fact is There was no roof in any shop and house. Let me tell you the Tale behind this fact.

There was a gorgeous princess named Ratnavati, and she was the daughter of Raja Chatrsingh. She was considered the Jewel of Rajasthan. She was stunning and had lots of marriage proposals. Once Tantrik (who knows all the black magic) came to hang out in the village. At that time, Ratnavati was buying some perfume from her village's market. The magician saw Ratnavati, and he fell in love with her. He did some black magic in Ratnavati's perfume. He cast a spell on the perfume so that Ratnavati would fall helplessly in love with him. She came to know of this and threw the bottle. It turned into a big stone and crushed the Tantrik under its weight, but he cursed the princess, her family, and the entire village. Before he could die, in a year, a battle was fought between Bhangarh and Ajabgarh, which led to the death of Ratnawati and most of the Army.

Due to the black magic wizard curse, no one in the village and the fort could be reborn. It is forever condemned to desolation and inhabited by Ghosts. So that if any villager tries to build a Roof, it mysteriously collapses.

That is the reason there is no house, or no shop is present with a roof. And it is also said that the soul of the black magician who wanders in the night. That is why there is no entry allowance after 5 PM. If someone stays there at night, it becomes there. There is a small temple before the entry of the place where people can go. Nobody lives in that village anymore. There are some watchers to take care of the fort. But they also are not allowed to go into the fort after 5 PM. This is the first such place in Asia where there is no allowance to roam at night.

The Palace and Fragmented temple

The Royal Palace has Seven stories, but now only Four stories Remain. The rest of it is in ruins and in danger of further irreparable damage due to the influx of tourists and handling the property. Now the whole property is left for hundreds of Selfie-crazy and haunt-fancied tourists with no sight of any guard anywhere. There is also a Fragmented Temple which does not have a single stone complete that is why that temple called as Khandit Mandir. 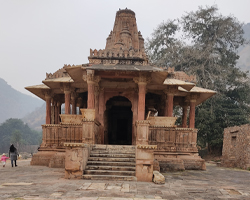 No people are living there, but a lot of monkeys have made their home there. People also bring food for those monkeys there and feed them. Monkeys don't do any harm to anyone. But we have to save our phones, cameras, and other items; otherwise, they go with that and do not give back. I have lost my Favourite bottle there like this. It took us 3-4 hours to visit the whole fort. We started feeling hungry, and we were looking for something to eat. Then we recognize that there were some resorts out there when we were moving to the parking area. But I did not think we would find some good options to eat there. Some people were going out of the resort called Raj Resort Bhangarh. I could not resist myself, and I asked them how the food experience was there. One of them replied, "Ohh...Very Amazing Delicious Food You Should Go and Try There". Then my mind was at peace. We went there and had some food. There were limited options for food, but still, the food was terrific. But nothing was as scary as I thought before going there because we went there at Noontime. If we went at night, we would never come back from there.